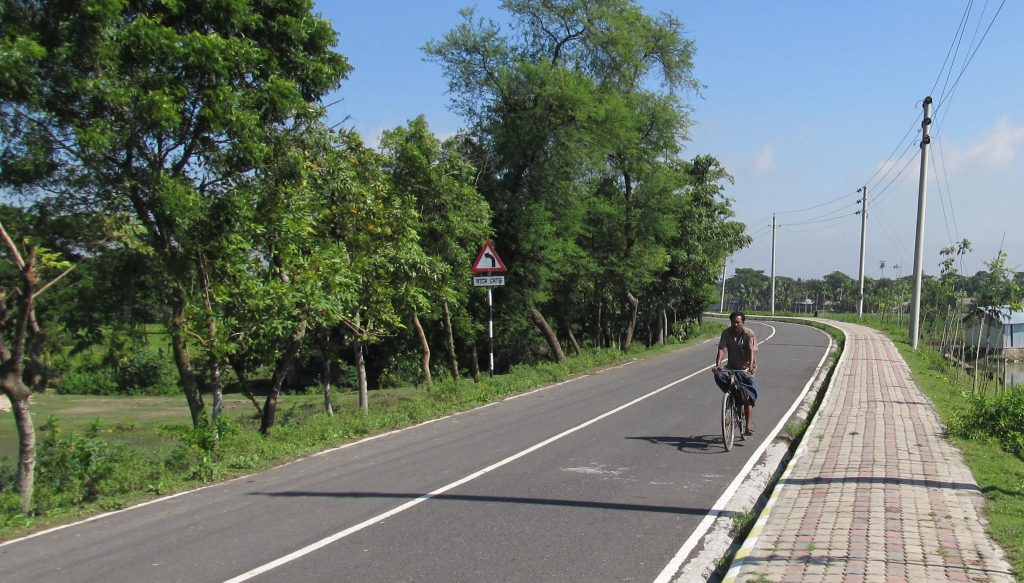 At least 200,000 urban poor population in Khulna City, Bangladesh are now benefiting from the road and transport infrastructure project that CDIA helped to prepare beginning 2008.

This was the estimate given by Mr. Abir ul Jabbar, Chief Planning Officer of Khulna City Corporation (KCC) when interviewed by CDIA’s Monitoring Specialist Mr. Rudini Baoy, during the conduct of the Tracer Study in Khulna City from 5-9 November 2016. The study sought to track the progress, effectiveness and impact of CDIA project preparation interventions.

“Clearly, the pro-poor and green urban transport project has effectively met the transport and mobility needs of the City, as well as helped climate-proof our road infrastructure,” noted Mr. Jabbar.

According to the study, Khulna City, with population of 1.3 million as of 2015, has had a high poverty rate at 40%. Its road infrastructure consisted of 600 km of pucca (metalled), semi-pucca (brick-soled) and katcha (unpaved roads). Almost 80% of its road traffic has been by non-motorized vehicles, such as rickshaws, which are unfortunately quite expensive for most of the poor population, prompting them to walk instead.

But majority of the pedestrians preferred to use road space rather than footpaths. This jeopardized their safety and added to the congestion on Khulna’s roads.

Moreover, the city is highly vulnerable to climate change, being located along the banks of Rupsha and Bhairab rivers, and affected by the tides of the Bay of Bengal.  The socio-economic survey commissioned by ADB in 2010 estimated that 98% of the population has been affected by disasters. Regular flooding has also crippled the transport system, rendered roads and footpaths unsafe, and resulted in substantial economic losses.

In 2008, CDIA approved the application of KCC for technical assistance in formulating their Medium-term Prioritized Urban Infrastructure Program (MTPUIP), as well as conducting studies in the transport, drainage, and solid waste management sectors. Upon completion of MTPUIP, the Asian Development Bank (ADB) provided project preparatory technical assistance (PPTA), which eventually led to the approval of the City Region Development Project (CRDP) sector loan in 2011.

This further sparked interest on the side of the German Government, which co-financed the transport project through the KfW. In preparation for the KfW grant, CDIA carried out a preparatory study on the “pro-poor and green urban transport in Khulna,” further taking the results of the MTPIUP forward.

As of October 2016, all CDIA-recommended components were incorporated in the transport project, which was set in motion by ADB’s CRDP sector loan amounting to USD 120 million (also covering Dhaka City), KfW grant amounting to EUR 10.5 million, and the Government of Bangladesh’s contribution of EUR 3.1 million.

Specific to the KfW-funded “Pro-poor and Green Transport” improvement project, 3 out of the 10 proposed packages have been fully completed, while progress of work in another 5 contract packages are somewhere between 80-96%.

These projects have paved the way for: 1) the promotion of mobility and accessibility for the urban poor, 2) climate-proofing of transport infrastructure, and 3) promotion of road safety.

In particular, with the construction of 10 km of access roads in 8 poor areas (wards), at least 200,000 poor people are currently benefiting from the enhanced accessibility to main roads, improved mobility, reduced travel time by almost 50% arising from increased vehicle operating speeds, and improved living conditions due to reduced flooding as a result of provision of road side drainage.

The project has likewise succeeded in showcasing climate adaptation measures that are worth emulating by other cities prone to negative impacts of climate change. Some notable measures include increasing the height of embankment roads, strengthening riverbank protection, and extensive urban greening.

Additionally, some 20,000 poor residents are now benefiting from improved access to institutions offering basic services such as health and education. KCC officials further expected that the climate-proofing measures will significantly reduce road maintenance costs and allow the city to spend these savings on other basic services.

Finally, upon full completion, the urban transport project is envisaged to ensure safety of pedestrians and non-motorized transport (NMT) operators. The provision of NMT lanes will not only ease the movement of NMT but also significantly reduce the risks of road accidents involving NMT and motorized vehicles. The provision of footpaths will moreover provide ample space and protection to urban poor who often resort to walking due to their inability to afford even non-motorized modes of transportation.

“Moving forward, KCC needs to allocate adequate resources for its maintenance, at the same time encourage community participation to ensure that access roads are well-maintained,” Mr. Baoy noted in his Tracer Study findings.

“Given also the right capacity to tackle not only road maintenance but traffic management, Khulna City will likely reap maximum benefits from the full implementation of all components of the infrastructure projects,” he concluded.