“Metro bus has made it very easy for me to go to university. Even if I have evening classes, I’m not scared to travel alone.”

This was how University student Ayesha Iftikhar described her experience riding the Rawalpindi-Islamabad Metro Bus in Pakistan, a bus rapid transit (BRT) system that CDIA helped to plan in 2012.

Since it started operation in 2015, the BRT has become the first choice of public transport for Pakistanis, serving 125,000 daily passengers between the cities of Islamabad and Rawalpindi. Before the BRT, public dissatisfaction of existing public transport was widespread at >90%. Service reliability, seat availability, and being treated with respect by drivers and conductors were key deficiencies noted by women, elderly and disadvantaged group.

To the delight of commuters, the fleet of 68 buses provides an affordable, safe, and dignified commuting option to people from all walks of life. By paying a nominal fee of Rs. 20 ($.19) per journey anywhere in the bus corridor, passengers can get to their destination in half the time it previously took them without the Metro.

Each bus is equipped with modern design, air-conditioned, and comfortable seating with provision for women in the front. Its 24 bus stations also have functional elements like ticketing booths, concourse level passenger transfer, platform screen doors and other amenities for passenger safety and convenience.

In 2012, CDIA helped to plan for this project, which is now perceived to have significantly altered the public transport system in the twin cities. CDIA assisted the Capital Development Authority (CDA) to prepare a 10-year public transport plan for Islamabad, of which the BRT project was a key component. CDIA’s PFS only covered Islamabad BRT with proposed extension to Rawalpindi in the future. But the government took it a notch higher by deciding to implement an integrated mass transit system that already covered both Rawalpindi and Islamabad. The project was completed on a 50:50 cost sharing basis between the Federal and Provincial Governments for a total of USD 438 million.

Five years thereafter, CDIA revisited the cities to do a tracer study, which sought to track the progress, effectiveness and impact of CDIA project preparation interventions. Based on discussions with city officials and beneficiaries, it was found out that the Metro Bus Project has brought about positive impacts on pro-poor and socially inclusive development, urban governance, and the environment.

In particular, Al Jazeera reporter Nicole Johnston observed that, “what’s unique about it is that all types of Pakistanis are using it, from the poor to the very well-off. The bus means poor people who couldn’t afford to travel around the capital, now can.”

Moreover, contrary to the heavy criticism in the initial phase of the project, experts in a workshop organized by Pakistan Sustainable Transport Project (PAKSTRAN) and the United Nations Development Programme (UNDP) deemed the metro bus project environmental friendly. “According to climate change experts, as transport is a major pollutant in Pakistan, the BRT project would help in reducing greenhouse gas emissions in the country,” the tracer study report stated.

Yet to fully achieve its anticipated development impacts, the tracer study put forward key recommendations, such as: strengthening the capacity of the CDA to achieve the objectives of the 10-year Transport Plan; better coordination between agencies that implement the BRT project; pursuit of the planned feeder route network for better access; and conduct of research studies towards more efficient planning of future transport needs. 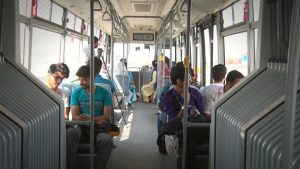 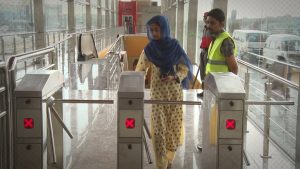