After 8.5 years of supporting CDIA, Joris van Etten will take on a new career path.

He joined CDIA in 2010 as Capacity Development Coordinator and Indonesia Program Manager under GIZ. In 2015, he became CDIA’s Program Coordinator and led the GIZ staff in capacity development, project safeguards and outreach. From 2010 to 2015, he oversaw the conduct of 70 training activities for 1,480 participants – with hope of strengthening their capacities in preparing bankable infrastructure projects.

In 2016, he transferred to the Asian Development Bank (ADB) as Senior Urban Development Specialist, concurrently as ADB Program Manager of CDIA. As such, he led the team of urban specialists and engineers working closely with cities in project development and financing. From 2016 to 2017, a total of 33 project preparation studies (PPS) were initiated to the benefit of 29 cities in Asia and the Pacific.

Mr. van Etten looked back to those 8.5 years with fond memories. “I am particularly proud of the number of cities we have been able to assist in preparing bankable and better urban infrastructure projects and subsequently link these projects to financing. I am also proud of the capacity development work we have done and the opportunities we have created for individuals to grow and develop themselves… But what really makes me smile is when I think back of the opportunities I had to visit our CDIA cities and work with local governments,” he said.

With partners in thought and with a grateful heart, he shared this message: “It has been an absolute pleasure to work with you all, and I want to thank you for the opportunity to learn from you. I look forward to staying in touch and hopefully working with you again in the future.”

After a successful time with CDIA, Mr. van Etten will be assigned to the Indonesia Resident Mission to work with the government in preparing and implementing ADB’s urban development assistance in the country.

For the meantime, he looked to the future of CDIA with confidence. “As reflected in CDIA’s 2018-2022 Strategy, the greatest opportunity lies in the fact that CDIA is now a Trust Fund through which long-term support to cities for the preparation of their urban infrastructure projects can be provided,” he said.

The CDIA team is grateful for his years of service and wishes him all the best for the future. 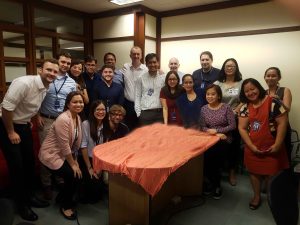