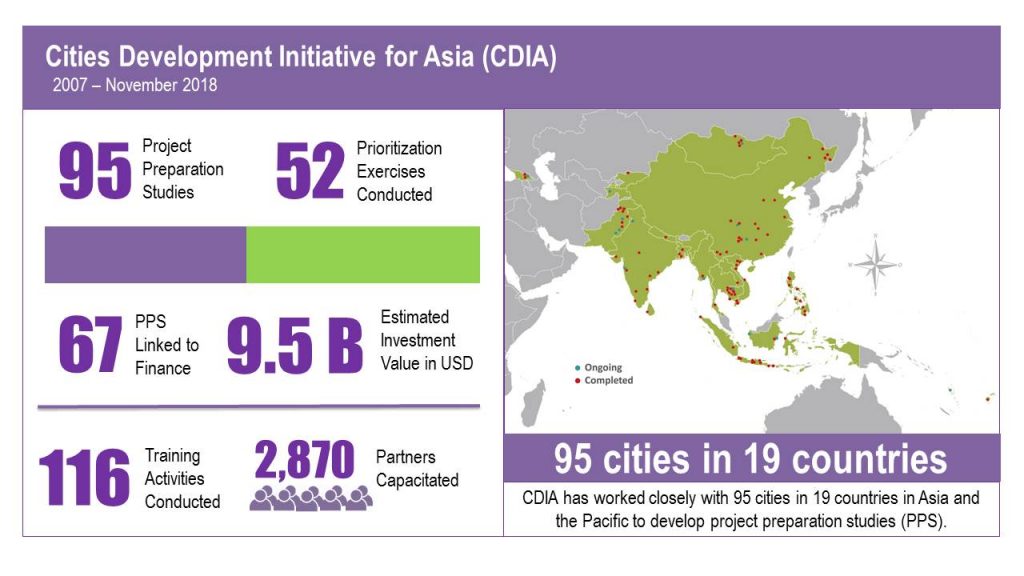 As another year comes to a close, we look back to what CDIA has accomplished with Asian cities, regional and national partner organizations, network partners, funders and other stakeholders. It was through everyone’s commitment that we are making headway in inclusive, resilient and sustainable development in the Asia Pacific region.

From 2007 to November 2018, CDIA has worked with 95 cities in 19 countries in preparing infrastructure projects. A total of 67 PPS have been linked to finance in 73 cities with estimated investment value at USD 9.5 billion. In 2018 alone, a total of 8 PPS have been completed and 13 PPS are currently ongoing.

We bring you again the PPS we did this year:

In Tbilisi, Georgia, we have finished the Metro Upgrade, which recommended specific rehabilitation works so that the Tbilisi Metro meets present-day technical, operational, safety and accessibility standards. We have also produced a video of how this project, and two other CDIA supported projects are helping the Tbilisi City Hall pursue a smarter way forward for its mobility.

We have also completed a water supply and sanitation PPS in Dushanbe, Tajikistan, considered as our first city partner to have adopted a participatory approach to urban resilience. CDIA conducted an urban resilience workshop to 18 officials and staff in order to identify and prioritize the stresses and shocks that challenge Dushanbe’s resilience. The work they did was expected to guide project design. In April of this year, CDIA completed the PPS and handed it over to the Asian Development Bank, expected to fund the implementation of the proposed priority project. ADB is now conducting financial, economic, social and environmental due diligence as part of its grant document.

In Mongolia’s capital Ulaanbaatar, we have likewise conducted a study on Air Quality Improvement, being CDIA’s 5th intervention with the city. This year, we also got the opportunity to revisit and see the status of implementation of our previous PPS to improve housing conditions in ger areas in Ulaanbaatar; and introduce reforms in water supply and sanitation provision in Mongolia’s third largest city, Darkhan.

In Guiyang, People’s Republic of China (PRC), we have successfully completed a PPS for expanding the Guiyang Vocational and Technical College (GVTC) to boost the quality of public education and improve the overall educational experience of students. It specifically seeks to construct an international vocational education and communication center and associated professional platforms through a public-private partnership (PPP) model.

Also in PRC, we have conducted a Green Urban and Economic Revitalization PPS in the province of Heilongjiang. The PPS targets to help the heavily coal-dependent cities of Hegang, Jixi, Qitaihe and Shuangyashan to encourage a non-coal economy and improve the environment and living conditions in the region.

Still in PRC, in the City of Kaili, CDIA has recently completed a PPS that seeks to enhance their East Green Public Transport Hub Project in order to meet the growing transport needs of its residents and tourists who are drawn by the numerous minority cultural heritage structures in the city. A key innovation of this project was the systematic integration of capacity development activities. This year, the second phase of CDIA’s focused capacity development support was implemented with the city-to-city learning exchange with the cities of Hong Kong, Shenzhen, and Guangzhou. The exchange focused on the successful implementation of transport-related PPP projects, and was made in preparation for the forthcoming project implementation following the completion of the PPS.

Finally in Ziyang City, PRC, we have completed a Green Transformation and Development PPS, which provides an example of how a small city could integrate industrialization with city development. Oftentimes, smaller cities have to compete with bigger cities to make them attractive for industries. At the same time, they lack the infrastructure needed to create better living conditions for their residents. CDIA’s PPS specifically seeks to improve the economic and environmental conditions in the Sichuan Ziyang High Technology Development Zone.

Finally, in the Indonesian cities of Banda Aceh, Bekasi and Mataram, CDIA has successfully finalized its PPS to support the ADB’s Sewerage System Development Project (SSDP). The project aims to 1) rehabilitate and construct offsite and on-site wastewater management systems; 2) establish effective service delivery system; and 3) implement public awareness campaigns. When implemented, the SSDP is expected to close the infrastructure gap that will ensure better health and environmental conditions in the three cities, and build their resilience against the impacts of climate change and other shocks and stresses.

CDIA has started to transition into an ADB-managed Trust Fund in January 2018 to improve the financial sustainability of the initiative. This transition will be fully implemented with the end of the direct engagement of the German government, through the Deutsche Gesellschaft für Internationale Zusammenarbeit (GIZ) GmbH this month.

Despite this, CDIA sees opportunities from this change in governance, and is expected to continue supporting cities in addressing gaps in project preparation and financing. After all, CDIA’s remit remains critical in the midst of great and growing demand for infrastructure in the Asia-Pacific region.