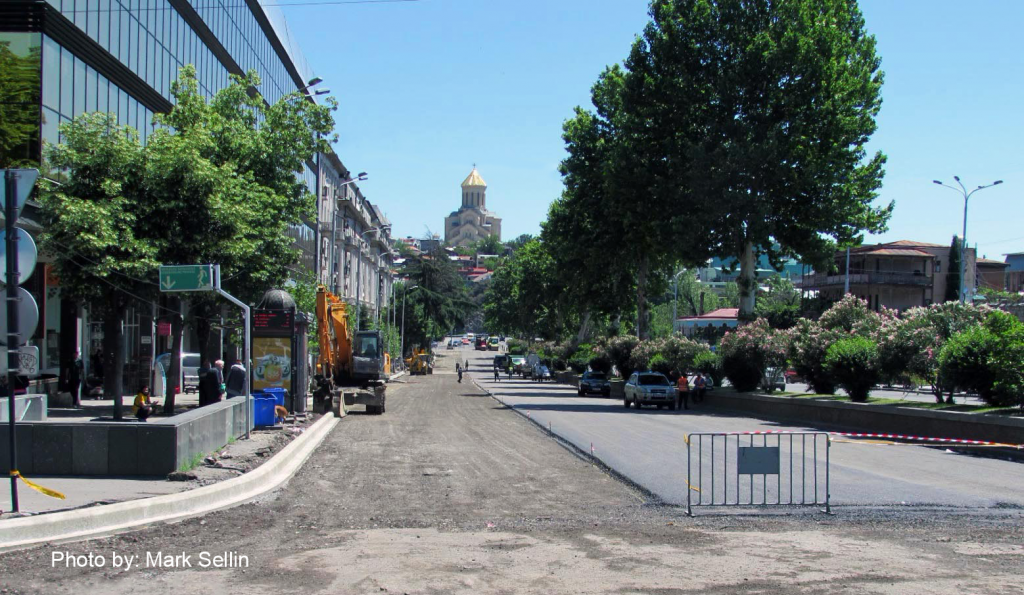 The COVID-19 pandemic brought public transport in most cities to a standstill. The country of Georgia declared a state of emergency from 21 March to 22 May of this year, and during that time, it required its citizens to work from home and suspended municipal transport operations.

Tbilisi, Georgia’s capital city, used the shutdown as an opportunity to accelerate the preparation of its bus priority program. With advisory support from CDIA, the city has been designing new bus lanes that can be set up quickly to improve the efficiency of its public buses.

“The city government had identified core routes where they wanted to implement new bus lanes,” says Fabienne Perucca, CDIA’s Urban Development Specialist who manages the Tbilisi Advisory Project. “We are now working with them on a day-to-day basis to set up these lanes. We are advising them on how to improve certain streets, sketching designs, training staff on bus design concepts and giving policy advice as needed. Our work continued during the lockdown and goes on even now as the city shifts to the ‘new normal.”

The Tbilisi City government, through its newly established Transport Agency, is developing a new 23-km strategic bus route in the downtown area as one of the measures under this program. Together with CDIA, they are designing simple, yet efficient and safe bus priority measures including parking and cycle lanes that can be implemented this year.

The city initially planned for major infrastructure work along the core routes, but as the government has had to divert its resources to the COVID-19 response, the use of simple designs that can be put in place using minimal resources has been the best way to adapt to the situation.

CDIA has also supported some capacity building activities that strengthen the program management skills of the Transport Agency staff and bring their technical competence up to international standards.

“Through the capacity building activities, the staff were able to produce base maps in GIS to scale, and make scale pencil sketches using these maps, which then enabled the design team to make designs using CAD,” says Mark Sellin, CDIA’s Urban Development Advisor and Team Leader. “The program management and technical enhancement activities have helped the agency design a more efficient bus route quickly and with as few resources as possible. Physical work on the bus lanes is expected to start in July.”

Despite the pandemic-related restrictions, CDIA and the city’s Transport Agency have been able to move this public transportation project forward while working from home. CDIA’s Bus Priority, Cycle and Parking Specialist Anca Palmer has supported the project design work while working remotely from the United Kingdom.

Meanwhile, Urban Management Specialist Nana Adeishvilli has been working alongside Mark Sellin in Tbilisi to do site visits and provide advisory support. After public transport resumed in late May, they have been able to work in the city hall while following physical distancing rules.

“The good working relationship between the city and CDIA has enabled us to overcome this project’s many challenges so far,” says Fabienne “The Transport Agency staff are digitally oriented and committed to move the project forward even in the midst of a pandemic.”

Georgia has now shifted to the ‘new normal’ and allowed public transportation to resume with certain restrictions. This brings new implications for the transport system.

“As lockdowns start to ease, one of the big questions is how people will travel safely on trains, buses and metros. It may be that cities will now favor buying shorter buses (12m) rather than articulated buses that can carry more people,” says Mark.

“A ten-day complete ban on cars and other private vehicles in mid-April has totally and yet temporarily transformed the city,” adds Fabienne. “People have rediscovered walking and cycling in the absence of conventional transport systems. E-scooters have also become quite popular now. So maybe, cities can also take the chance to introduce more ambitious schemes, such as reallocating street spaces from cars to make their city more pedestrian-friendly.”