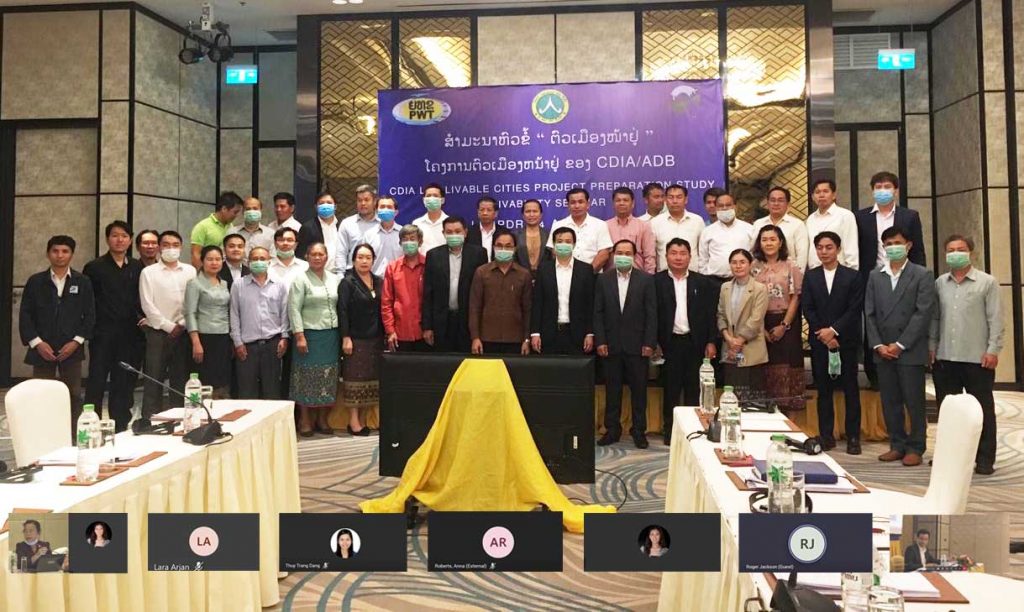 To complete the interim workshops for the ongoing Lao Livable Cities Program in Lao People’s Democratic Republic (PDR), the CDIA team adopted a new strategy of blending face-to-face meetings with virtual consultations for the first time in its history.

CDIA collaborated closely with Lao PDR’s Ministry of Public Works and Transport (MPWT) and its provincial counterparts, as well as officials from the cities of Pakse, Luang Prabang and Kaysone Phomvihane to run these synchronized in-person and virtual workshops at the interim point of the PPS for the Lao Livable Cities Program.

“Lao PDR currently has a limited number of COVID-19 cases which allowed us to travel into these cities for face-to-face meetings,” said Dr. Viengnam, Deputy General of the Department of Housing and Urban Planning of MPWT.

But with international borders still closed, CDIA’s national counterparts facilitated the workshop discussions while its international experts prepared all presentations from their respective home countries of Australia, Belgium, Kenya, Philippines and the United Kingdom.

“We are glad to be able to continue supporting the three Lao cities to achieve their ‘livability’ potential by looking at opportunities to enhance the management of their solid waste, wastewater and urban infrastructure,” says Chee Anne Roño, CDIA’s Urban Development Specialist who is managing the Lao PPS remotely from Australia.

The PPS was first labeled the Livable Cities Program, and the CDIA PPS was to provide initial inputs into the Asian Development Bank’s (ADB) investment portfolio in Lao PDR.

During stakeholder consultations at these workshops, CDIA invited Thuy Trang Dang, Project Officer from ADB to formally introduce the Urban Environmental Improvement Investment Program (UEIIP) that succeeds the CDIA PPS on Livable Cities Program. The UEIIP is a multi-tranche financing facility (MFF) programmed to start in 2021 in line with ADB’s Country Business Plan in Lao PDR.

Stakeholders participated in three city-level workshops held in Pakse, Luang Prabang and Kaysone Phomvihane between 3-7 August 2020. There were about 30 participants at each workshop, and they discussed the findings of the rapid assessments the CDIA technical team produced based on project site visits, survey results and consultation discussions during the first phase of the PPS.

The key objective of these discussions was to prioritize project components for inclusion in the ADB MFF investment program, which the bank will implement over the next decade.

Stakeholders also identified institutional issues and the capacity building needs they need to address in the short, medium and long-term.

Despite logistical challenges, the workshops went smoothly and the facilitators were well-prepared. Roger Jackson, PPS team leader who joined the meetings from his home in the UK, says “I would like to extend sincere thanks to the national deputy team leader and the civil engineer for the long hours spent in translating the presentation material to Lao and the rapid preparation of draft reports on the workshops in English.”

Following the city-level workshops, around 60 key stakeholders met on 14 August 2020 in the capital city of Vientiane for a central interim workshop to synthesize the results of their city-level consultations. The entire session was broadcast online to international team members to give everyone a chance to participate virtually.

“There was a broad agreement on the proposed scope of infrastructure projects that was prepared for each of the city,” says Chee Anne, “and our partners also made further suggestions on how to improve those components based on government priorities and recent developments. We are due to do another round of follow up consultations through the national consultant-team to validate the results of the interim consultations.”

The next steps in the process

The CDIA PPS team will close out this interim stage of the project, conduct pre-feasibility studies on a final set of identified sub-projects for each tranche, and undertake safeguards due diligence work.

“There will be more logistical and technological challenges as we go deeper into detailed discussions with the Lao government officials at the city and national levels,” says Chee Anne. “We are ready and determined to work with them to move on to the next stage of pre-FS despite the many difficulties brought to the project by the pandemic. We will do what we always do at CDIA, we innovate.”