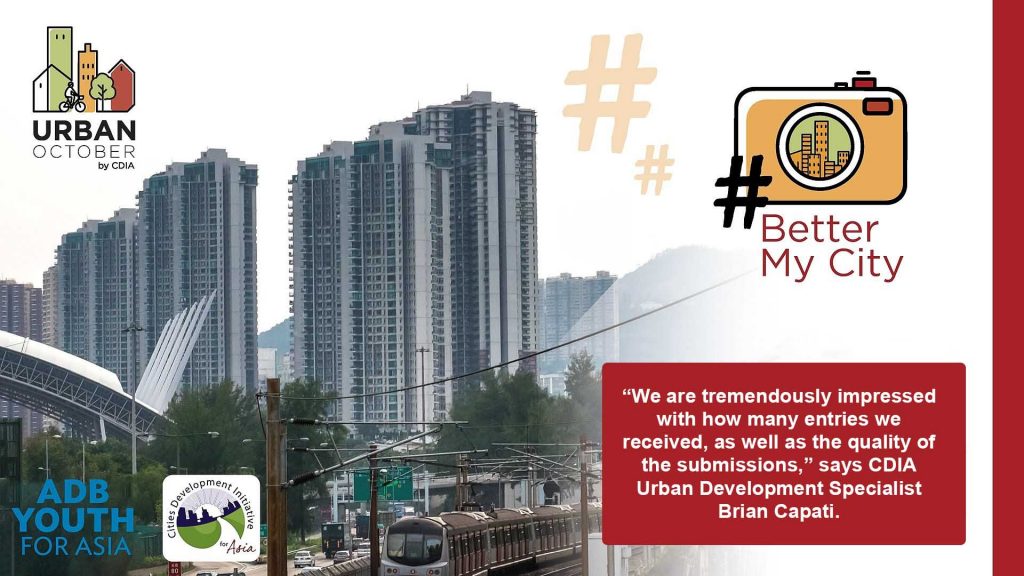 CDIA has announced the winners of the #BetterMyCity photo contest, an element of its 2020 Urban October Campaign. CDIA is pleased to have collaborated with ADB Youth for Asia to organize this interactive photo contest, which took place from 1st to 23rd October.

This contest gave community members across the Asia Pacific region, especially young people, the chance to demonstrate their vision for the future of their cities by editing photos to show potential infrastructure and livability improvements.

CDIA ran the contest on its social media platforms, and received more than 100 entries during the three-week contest period.

“We are tremendously impressed with how many entries we received, as well as the quality of the submissions,” says CDIA Urban Development Specialist Brian Capati. “This is a good sign that youth across Asia care about the urban development decisions which affect their future. It’s time for local governments to create a more inclusive framework that mobilizes young citizens so they can take ownership of the urban planning issues.”

The general public then chose the Citizens’ Choice Award winner by voting for their favorite photos on Facebook.

“This small town in Dombivli is where I grew up,” Lalit wrote in the photo description. “As I pass by this street everyday, I see the many potentials for improvement. There should be cycling lanes and better road signs which are safer for people, especially school kids. School canteens generate lots of food wastes everyday, so why not set up a free food stall for the homeless? Solar screen with a weather forecast will help the city’s dwellers to update the latest climate news and be well prepared just in case of natural disasters. And applying environmentally friendly infrastructure such as solar lamps is an easy way to reduce carbon emission.”

“Lalit’s photo has an edge over other submissions because almost all groups of the community, especially the most vulnerable, like children and homeless people, are considered in his infrastructure development vision,” commented Mr. Brian Capati who also served as a jury member for the photo contest. “Creative yet practical, inclusive yet discerning, Lalit’s entry deserves our full endorsement for the Experts’ Choice Award of the #BetterMyCity Photo Contest.” 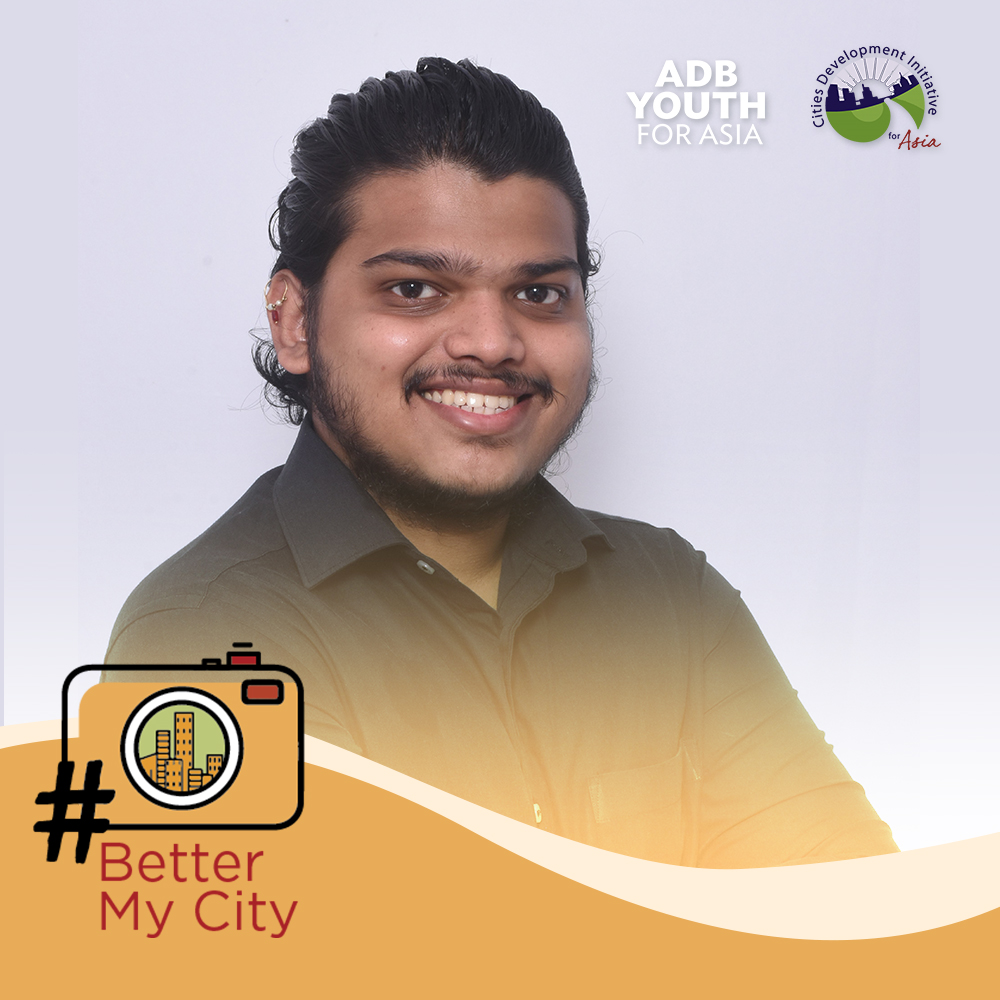 Lalit is currently an architecture student from Pillai HOC College of Architecture in India, and is a proud citizen of Dombivli City. He is interested in minimalistic and practical design, and tries to bring an understanding of human psychology into his designs, so he can understand how they will benefit from new infrastructure.

When asked why he participated in the #BetterMyCity Photo Contest, he said, “I liked the way the contest helped me think of different ideas and concepts to make my city a better place to live, which is very relevant to what I’m learning this year in town planning.”

Lalit also made recommendations on how his city can engage youth more in city design and infrastructure projects. “City officials need to give youth equal opportunity to be a part of the decision-making process when it comes to city planning. And the very first step is to include (more) younger members in the strategic panels. Timely and transparent communication, especially through social media is extremely important to keep the public informed about the progress and encourage two-way conversations between city officials and youth. Youth is the city’s future and we know what’s good and what’s not for us.” 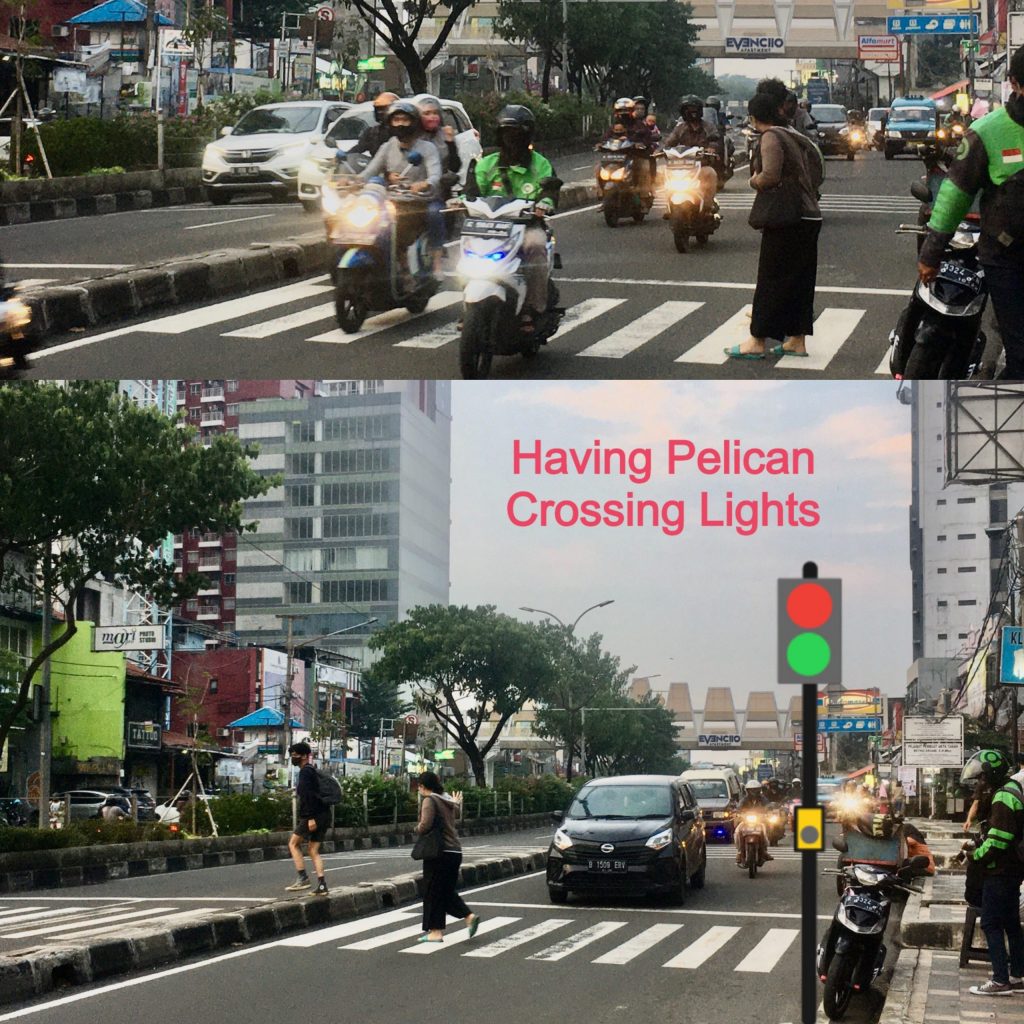 “Despite being Indonesia’s one of the most important cities, Depok’s urban environment has always been criticized for its disorganized city structure causing public inconvenience,” Husnul shared in the story behind her photo. “One of the highlighted challenges is the facility for pedestrians. This crossing plays an important role in connecting Universitas Indonesia (UI) campus, commuter line station, public transportation, city center, and people’s residences. However, this crossing is very well known for being too dangerous for people to cross, as drivers usually block pedestrians from crossing the road by driving faster. There were countless accidents over the years, but the local government has taken no action. Instead of a solution, this issue has joined a meme race on social media as people call this “Penyeberangan Maut” (Death Crossing) – a sarcastic way people communicate to raise this big concern to the government.”

Husnul added that “A pelican crossing light will be a cost-friendly and an effective approach, which makes it much easier and safer for all, especially pregnant women, kids, elderlies, and people with physical disabilities.”

“#BetterMyCity has provided a platform for people to voice out their concerns regarding urban development in their own regions,” Husnul said. “It gives an opportunity for people to share the challenges and talk about the real issues of their cities by showcasing a self-descriptive picture of the problem and the solution.” 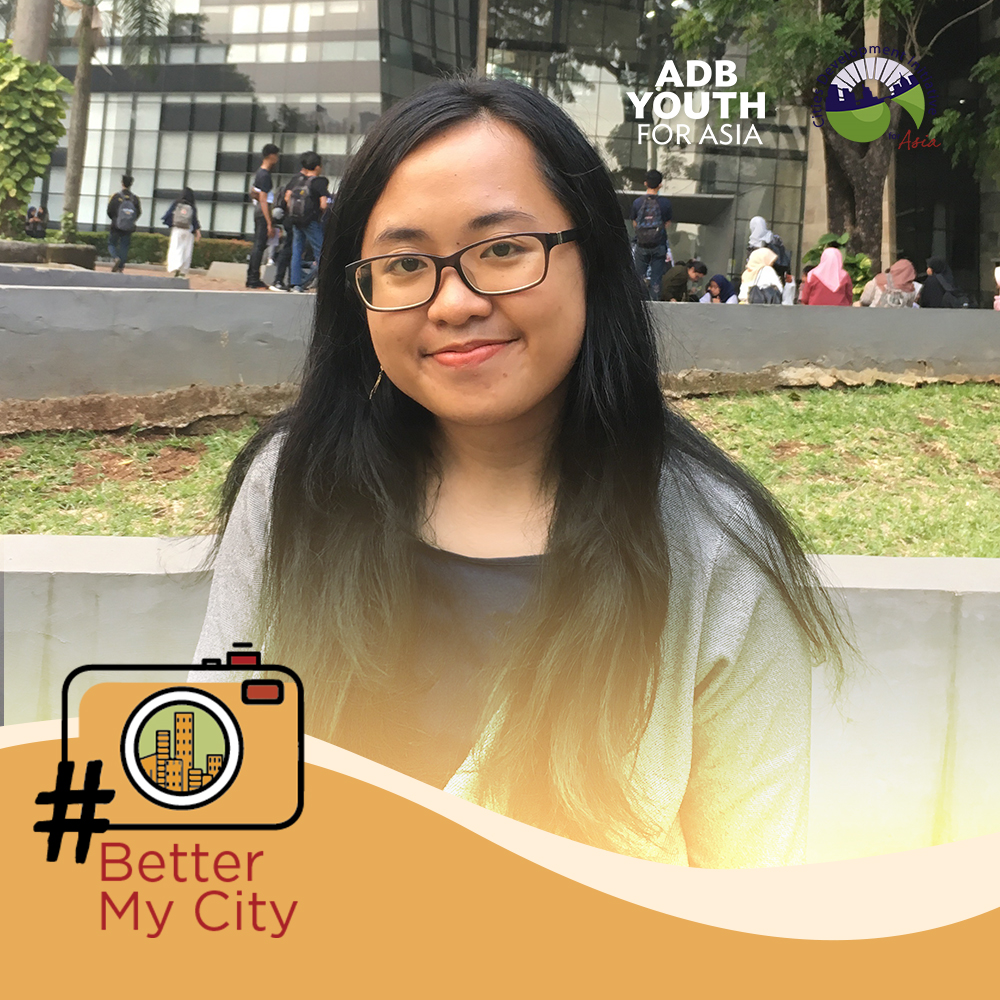 Husnul is a graduate of Universitas Indonesia and is now working as part of the Programming Team for an international organization under one of the government’s foreign services in Indonesia. She said that she has always been interested in city development issues, and is an active advocate for a better city of Depok on social media.

When asked about how young people can work collaboratively with city governments in urban planning projects, Husnul offered this thought: “We (young people) are often underrepresented in the process of decision-making, especially in infrastructure development. Given that many political aspects and particular interests are involved within the government structure. Depok still has a quite strong old-fashioned structure in the government with conservative approach. Engaging with the government has its own challenges and there will be gaps between youth and government due to differences. However – ‘when there is a will, there is a way.”

“To increase youth involvement, young people should be very proactive including aligning themselves with the government’s main agenda, by getting more capacity in terms of knowledge, then taking real actions and making an impact,” Husnul concluded. “Engaging ourselves with prominent stakeholders around, for example education institutions, communities, or key opinion leaders, and building positive connections with them, might be the very first steps.” 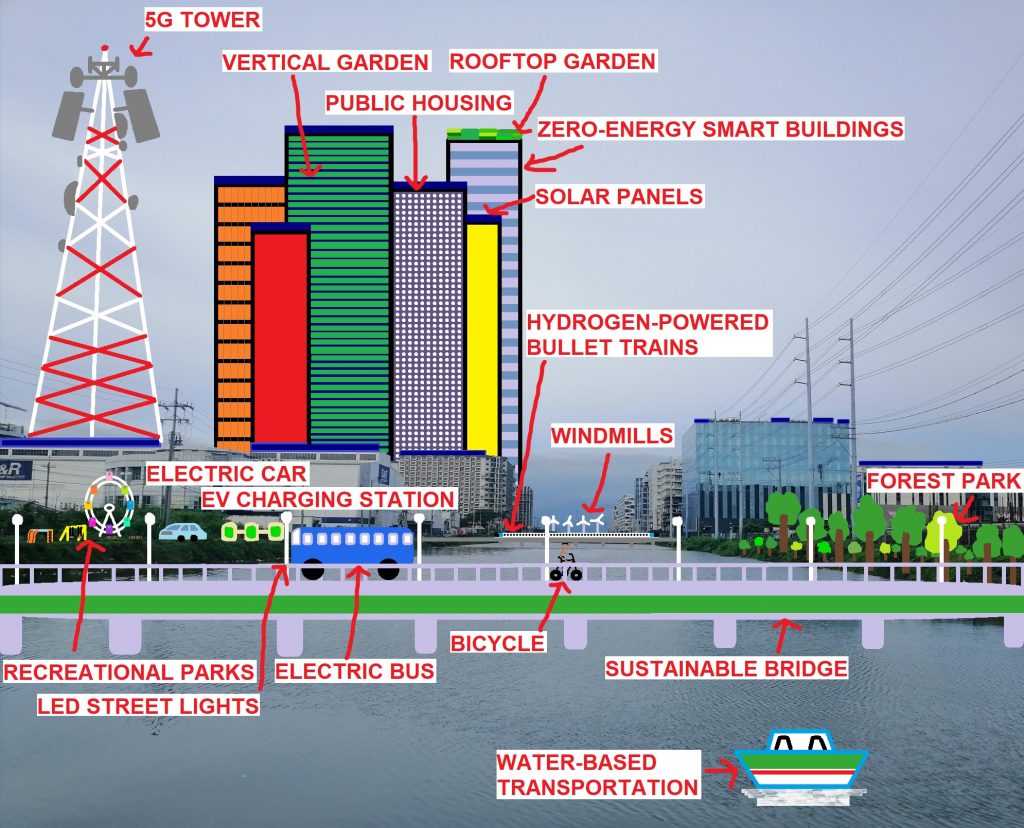 “My city is a highly urbanized city, but it doesn’t mean problems don’t exist,” Christopher explained in the description of his vision for the future of his city. “[They include] traffic congestion, overcrowding, air pollution, water pollution, flooding, informal settlers, lack of recreational parks and green spaces, global warming and climate change. These issues hinder my city to become a livable, equitable and sustainable city. I firmly believe that environmental problems must be given an adequate consideration in order for a city to improve livelihoods and achieve prosperity. Consequently, social and economic development will be maximized.” 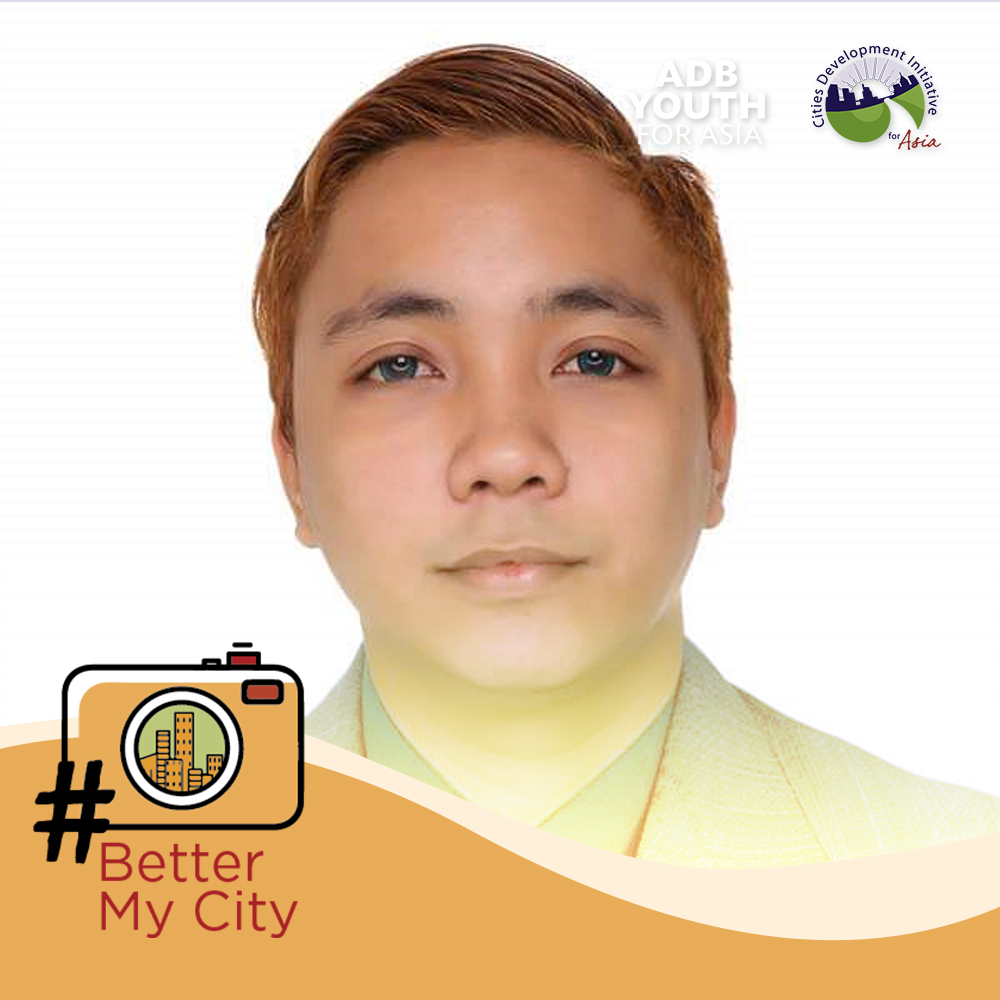 Christopher Gerale is currently a civil engineering student of the Technological Institute of the Philippines, and his interests include learning about urban planning and development. Christopher considers himself a proponent of sustainable infrastructures, as well as efficient and renewable energy.

When asked why he participated in the contest, Christopher said: “CDIA’s #BetterMyCity photo contest is an opportunity for young passionate citizens like me to express my vision and ideas on what I want my city to be. I joined the contest so that I could share and give solutions to the problems that my city, and probably many other cities, is facing. And I see the contest as a platform to inform everyone the importance of energy efficiency and renewable energy in saving our planet against global warming and climate change.”

Christopher also expressed his concern about the limited youth participation in infrastructure development projects in his city: “City officials in Parañaque are not doing a good job in involving youth in decision-making regarding planning and enhancing the city. We, the younger generation, must decide about our future. I think my local government must realize the importance of younger people because we have the knowledge and capacity to contribute ideas. I highly suggest that the local government of my city must prioritize youth empowerment and must give us opportunities to engage and offer our skills that will lead to positive changes. By having active collaboration with city experts, youth can learn valuable skills and become responsible and empowered citizens, which in turn benefits the city.”

Minh Nguyen, Youth-led project advisor from ADB Youth for Asia offered her thoughts on the contest:

“I’m thrilled to see young people’s passion and dedication in speaking up about the urban issues their cities are facing. But this is not the end, city officials and urban development experts need to listen more to youth and take all those ideas into serious consideration, and together we make changes. I hope the photo contest brings the issues to city officials’ attention and makes them realize that it’s time to engage youth in the city development efforts.”

The announcement of #BetterMyCity Photo Contest also brings the Urban October Campaign by CDIA to its end. We would like to say thanks to ADB Youth for Asia for being our principal partner during the campaign, and CDIA’s funders and supporters who made not only Urban October Campaign but all CDIA’s work a success – the Asian Development Bank, the Agence Française de Développement, the European Union, and the governments of Austria, France, Germany, and Switzerland. We would also like to thank our youth photographers for the quality of their images which tell simple yet thought-provoking city stories across Asia and the Pacific.