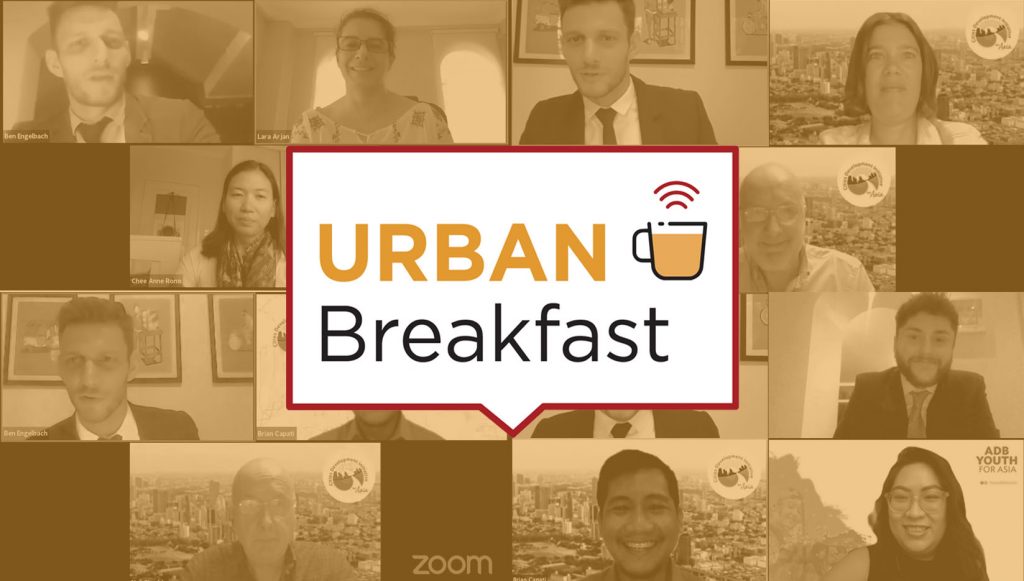 More than 2.3 billion people live in Asia Pacific cities, and this number is growing every day. This month, CDIA partnered with Asian Development Bank’s Youth for Asia (YfA) to join the global celebration of “Urban October” to bring everyone’s attention to urbanization – and the challenges and opportunities it presents.

What will happen to cities after COVID-19? At the first Urban Breakfast webinar on October 8th, CDIA’s urban development experts Lara Arjan and Chee Anne Roño described how cities are adapting to the pandemic, and using digital technology to “build back better”.

“The pandemic presents us with an opportunity to really look at our development paradigms and the way our economy runs and to question everything,” said Lara, who is also ADB Project Officer in Charge of CDIA. “It seems overwhelming, but I think [right now] the whole world is defining how they want their future to be.”

Chee Anne, who has been based in Adelaide, South Australia since March shared her observations on how the appropriate use of data successfully paved the way to reclaim urban life in South Australia.

“Controlling the spread of infection was a key starting point for socio-economic recovery,” said Chee Anne. She also shared that at the onset of the lockdowns, before contact tracing apps were even introduced, the purposeful and timely use of data combined with safety measures became key steps to instill public confidence.

“If you arrived on a flight, you would be aware if you had been a close contact of a known and confirmed case via the South Australia Health website, then tested or isolated. Slowly, people are out and about, free of the concern of being part of the pandemic statistics,” she added.

Solid waste is a major cause of environmental pollution, and is responsible for spreading harmful and infectious diseases in cities. In the Urban Breakfast webinar held on October 15th, CDIA Program Manager Neil Chadder and Urban Development Specialist Brian Capati shared their experiences in carrying out some of CDIA’s project preparation work in the  solid waste management (SWM) sector.

“I have always felt that there is an imbalance in the provision of any service in the city,” said Neil, “SWM is the same and this has to change. We have to find ways to provide services for all, and this is at the heart of CDIA’s pro-poor approach.”

Neil and Brian advanced the importance of a holistic approach to solid waste management, one that covers all aspects of SWM, from household collection to final treatment and disposal while at the same time integrating climate change adaptation and mitigation into the project, working with organizations to stop plastic waste pollution in particular, and integrating SWM with other infrastructure projects.

Brian answered a participant’s question on how to make future waste management programs resilient to pandemics by advising local officials to take a careful and holistic look at the handling of medical waste in particular. “Right now, some cities are ill-equipped to handle medical waste, [but] at least they should be cognizant of how it should be done properly. It is highly critical that medical waste should be properly collected, transferred, treated and disposed,” he said.

The Asia Pacific region is experiencing an increase in extreme weather events, and coping with the long-term effects of climate change. In the October 22nd webinar, Neil was joined by CDIA Urban Development Specialist Fabienne Perucca, and the two shared their insights on how cities can build climate resilience through infrastructure development and capacity building.

“Climate change adaptation and mitigation is one of our pillars of action because we believe that the opportunity is now!” said Fabienne. “Managing climate risk early is more cost effective than responding later.”

“Strategically, when you formulate strong urban resilience plans and you put forward low carbon and resilient recovery projects, they actually help cities meet their goals and the transformation they want,” she added.

Fabienne and Neil explained that CDIA mainstreams climate change in its project preparation studies by assessing vulnerabilities and systems, requiring carbon footprint analysis, and considering the risks and vulnerabilities in project design, among other measures. Furthermore, as part of its institutional capacity development support, CDIA assesses each city’s adaptive capacity to be able to incorporate climate risk considerations effectively in their decision-making processes.

At the webinar, CDIA also launched four knowledge products (KPs), which were created to serve as guidance notes for the government of Huangshan, China for their Anhui Huangshan Xin’an River Ecological Protection and Green Development Project. In the KPs, CDIA proposed innovations and international best practices to help Huangshan reduce pollution in the Xin’an River, and they hope that other Asia Pacific cities will also benefit from these materials. (Download the knowledge products here.)

Youth are the future policymakers and citizens of cities, yet their engagement in urban planning and development is still overlooked by many city officials.

In the  October 29th webinar, Brian Capati was joined by Lee Lambert, Youth-led Research Advisor for ADB and Minh Nguyen, ADB Youth for Asia’s Youth Project Designer to discuss the importance of engaging the youth in urban development projects. They outlined the barriers to mainstreaming youth involvement, and the lessons ADB, YfA and CDIA learned while  implementing some youth-led initiatives.

“Young people are not only the ‘future’, they are also the ‘present’ of every single city in Asia and the Pacific. We have a lot of young people in cities and they have very specific characteristics. Leveraging on their characteristics would contribute to the development process in any city,” said Minh.

“Urban development is very complex. There’s a lot of agenda, strategies, interventions and also a number of specific actors at different levels,” Lee said as he explained the challenges of mainstreaming youth engagement in urban development. “Finding the role for young people to meaningfully engage within that complex architecture is slightly difficult. Also, there’s a lack of prior experience from a lot of governments working with young people and few best case practices. Without them, countries and governments are a little bit hesitant to engaging with their large youth population.”

Brian elaborated on Lee’s insights on the disconnect between local leaders and young people, by saying that “it is quite common that there is no youth representation in city governments or even at the lowest levels of government in Asian countries. One of the reasons might be the country’s history, which could be contributing to the ‘generational divide.’ But with recent technologies, connectivity and learning opportunities, youth have become more involved in city initiatives.”

Based on the experiences that the experts shared during the webinar, they hope that city governments and development partners can mainstream youth engagement by seeing young people more as an ‘opportunity’ rather than ‘risk’ to urban development, and working with them to carefully and strategically identify the entry points where they can play a meaningful role in development projects, and build upon the resources that they have. Through these, young people would no longer be just beneficiaries of these development projects, but rather partners in their design and implementation.

Click the links below for the recorded versions of the Urban Breakfast webinars:

Out with the Old: Improving Urban Waste Management

Change We Need: How Cities Can Build Climate Resilience