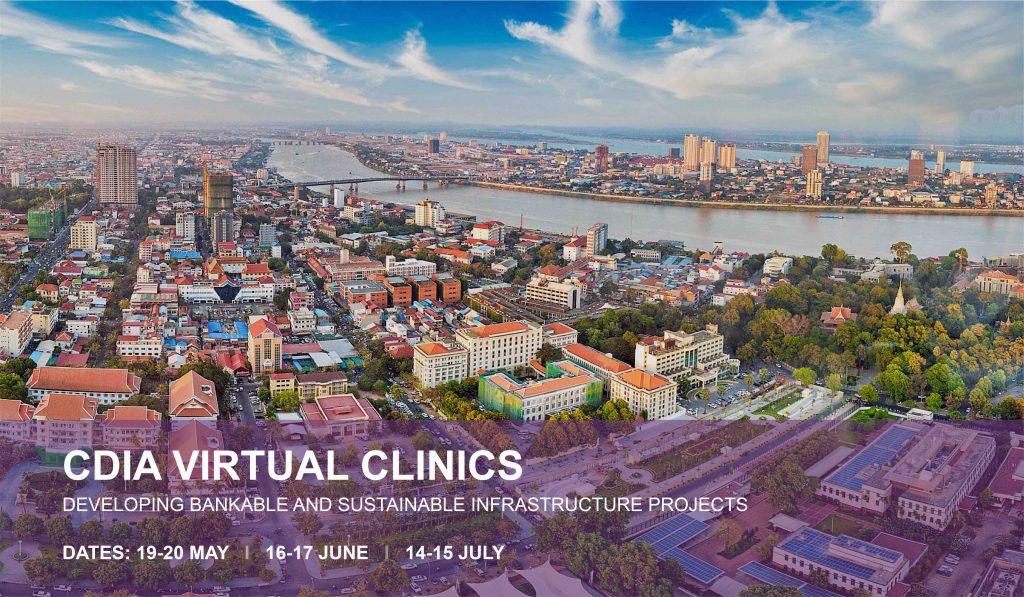 Asia Pacific cities are still adapting to the new context of the COVID-19 pandemic, and this makes preparing and securing funding for urban infrastructure projects linked to climate priorities more challenging than ever.

CDIA has taken steps to further help cities during these unprecedented times with a new series of “Virtual Clinics.” The clinics are a unique capacity development initiative to help Asia Pacific secondary city managers in developing countries prioritize and develop bankable and sustainable climate-focused infrastructure projects that are in line with funder priorities.

Facilitated over Zoom, the clinics are designed to give each participating city structured 1-on-1 consultations with CDIA’s friendly team of urban development experts with a proven track record in infrastructure development and financing. To date, 75% of 106 project preparation studies (PPS) commissioned by CDIA have been linked to downstream financing estimated at $11.3 billion.

Bankability and the importance of comprehensive project preparation – what’s at stake?

During the clinics, the CDIA team will lend cities their insights on preparing bankable infrastructure projects that provide key services for their people while also adapting to climate change.

But what is bankability – and why is it so crucial to infrastructure project preparation?

According to a paper published by the Cities Climate Finance Leadership Alliance (CCFLA), “bankability” refers to projects that have been “prepared up to a stage where an investor is willing to engage.”

In other words, if a project is not bankable, it will probably never get off the ground.

However, the report also notes that numerous challenges exist between project conceptualization and securing funding, such as: insufficient project development; missing link to the financial sector; insufficient returns; high risk in the development phase; long-term nature of infrastructure investments versus short-term preferences of investors; and resistance from the local community.

All of this is to say that, even before the pandemic, it was not a simple task to develop bankable infrastructure projects. This is why the CCFLA report also states that a “solid pipeline of bankable projects that can effectively address climate challenge is still lacking in most countries.“

Beyond this, project preparation requires the competent performance of environmental and social due diligence, a precise technical knowledge of infrastructure and climate resilience (and, of course, a deep familiarity with financier priorities) to ensure the highest odds of bankability and sustainable outcomes.

Secondary cities around the region had already felt these financial and skills resource constraints even before the pandemic. City officials sought to offset them by traveling to other cities to attend capacity development training for upskilling in project preparation, or welcoming national or international experts to their cities for consultations on the same.

Even then, the majority of cities were still left with no choice but to prepare projects on their own, with on-hand resources. This approach resulted in limited project preparation that ultimately could not find funding, or to the funding of projects that may be unsustainable in the long run.

Since the outbreak of COVID-19, project bankability for secondary cities has become even more difficult. There is more competition for short- and long-term project funding due to governments prioritizing funds for stimulus and other countercyclical measures, and border closures have made in-person capacity development and consultation appointments impossible for most cities.

This prompted CDIA to take their consultation into the virtual space and work with multiple cities at once.

The CDIA team drew off its 14 years of project preparation and institutional development experience to inform the structure of the clinics, which consists of two-day sessions hosted virtually by the CDIA team.

Attendance is capped at three cities per clinic, which gives attendees time for in-depth consultation with CDIA officials – and also lets them exchange ideas and experiences with other city officials.

Some highlights of the clinic agenda include the following:

Unlike other training activities where discussions revolve around case studies of what other cities have done, the CDIA Virtual Clinics focus on finding concrete solutions for the development issues that each participating city is facing.

By the end of the clinic, cities will have the following tangible outcomes:

With its new Virtual Clinic series, CDIA has identified a way to build the capacity of cities to find traction in the new landscape of the pandemic and prepare urban infrastructure projects that are in line with funder priorities.

CDIA now welcomes city officials to join an upcoming Virtual Clinic – (while slots are still available!) – and take an important step toward a more livable and sustainable future for their cities.

Learn more about CDIA’s Virtual Clinics and register to attend at: www.cdia.asia/virtual-clinics.

The theme of this year’s World Environment Day celebration is ecosystem restoration, and for most people this will bring to ...