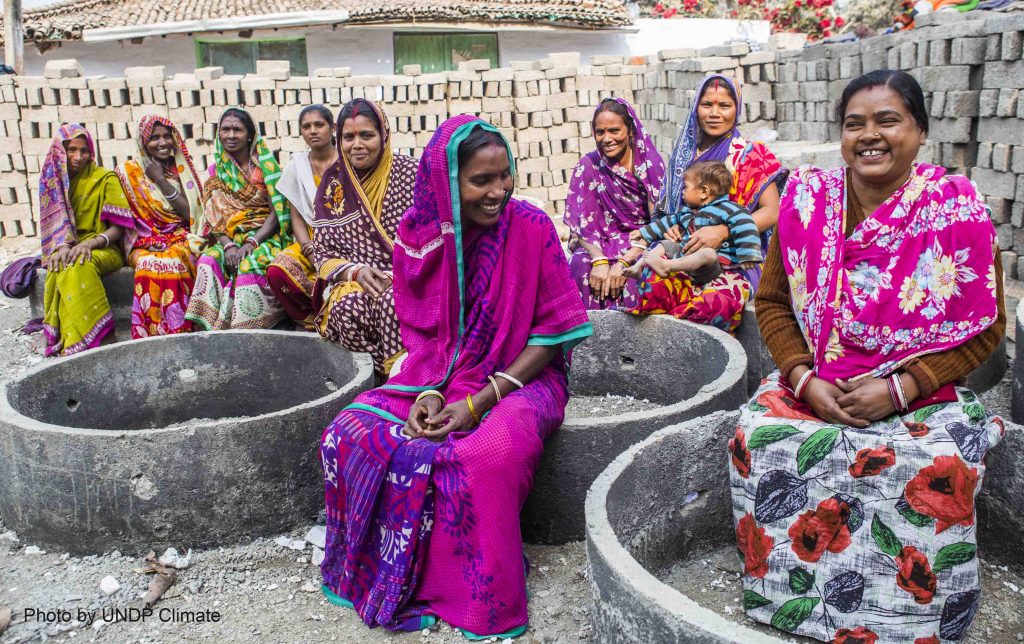 Cities have the potential to address this gender disparity and mitigate its consequences by mainstreaming gender-inclusion and climate resilience into their infrastructure projects. Doing so will create more livable environments for their residents, while paving the way for the achievement of SDG 5 on Gender Equality and Empowerment for Women and Girls.

Why infrastructure needs to be inclusive and resilient

Women and girls can face dire consequences as a result of inadequate infrastructure.

Inadequate transport infrastructure, for example, prevents women in developing cities from receiving urgent medical care. The Asian Development Bank (ADB) has stated that 75% of maternal deaths, defined as deaths while pregnant or within 42 days of giving birth, could be prevented by providing women with safe and affordable mobility options that can allow timely access to essential health care facilities. Improved transport infrastructure can also positively impact girls’ school enrollment and let women access key urban infrastructure and services, and perform “market work,” which are activities that generate remuneration.

Beyond access to medical care and other education and livelihood opportunities, inadequate transport systems are shown to be an enabler of gender-based violence; in a study commissioned by the United Nations Population Fund (UNPF), 90% of female respondents in Sri Lanka reported they had endured sexual harassment while taking buses or trains.

Insufficient infrastructure also means women must directly contend with the impacts of climate change; saltwater intrusion from rising sea levels has degraded fresh water quality in rivers in India and Bangladesh, and this has led to health consequences and economic losses for women who depend on those waters for their livelihoods.

Of course, climate change broadly will impact both men and women around the world. However, as pointed out by Maribel Hernandez, Technical Director at the Climate and Resilience Hub (CRH) – Willis Towers Watson, “Due to cultural and socio-economic differences, climate change impacts are felt differently between men and women both in intensity and in nature, as well as on the time these impacts are felt,” she says.

There is, therefore, an urgent need for inclusive and resilient infrastructure in cities. ADB reported that such infrastructure could free up much of the time women in the region spend performing domestic and family duties (women currently perform an estimated 60% to 84% of these tasks) and this time could be reallocated toward “paid market work”. For example, some cities in the People’s Republic of China were able to help their households save hundreds of hours per year in fetching water – a task that commonly falls to women – with a water pipeline project.

Depending on the country, women in the region are currently only able to contribute between 11% and 42% of overall market work. Once they are able to make more substantial contributions, this will catalyze increased economic growth. UN Women estimates that advancing women’s equality could add $4.5 trillion to Asia Pacific countries’ collective annual GDP by 2025, corresponding to a 12 percent increase in regional GDP.

To this end, ADB is working toward a target of 75% of its invested infrastructure projects promoting gender equality. Maribel adds that gender is now part of the DNA of development agencies and international climate funds, and the inclusion of gender aspects is a mandatory requirement for securing climate funding. “For instance, all projects that are submitted to the GCF (Green Climate Fund) have to demonstrate a strong gender component. A gender assessment and action plan aligned with the Fund’s Gender  Policy, is a mandatory requirement for the submission of a funding proposal to the GCF.”

How to design gender-inclusive infrastructure projects?

While cities are now developing climate-resilient infrastructure with the intention to protect their citizens from natural disasters and adapt to long-term effects of climate change, many have not gone as far as integrating gender inclusion factors into their climate vulnerability assessments during the infrastructure preparation stage.

“Gender impact assessment should be an indispensable part of a climate risk and vulnerability assessment when it comes to climate-linked initiatives, including developing climate-resilient infrastructure. There are different methodologies already in place which cities can adopt, or customize, based on their local context,” shares Anu Jogesh, Associate Director at the CRH.

To not integrate gender considerations is an urgent problem, and some international development organizations have already developed comprehensive guidance for gender mainstreaming activities and methodologies throughout the early phases of infrastructure project design, preparation and assessment. For instance, UN-Habitat provides step-by-step guidelines for gender-sensitive urban planning and facilitating full and equal participation of women and other members of vulnerable populations throughout the critical early stages of the project life cycle – particularly the climate risk assessment and planning and design stages. Meanwhile, the UN Women’s guide on developing gender-inclusive infrastructure projects advises urban planners and stakeholders to conduct a gender analysis, which evaluates the local distribution of resources and opportunities based on gender. The guide further recommends drafting a gender action plan with recommended activities to address gender-related constraints and opportunities during project preparation and implementation, undertake community engagement with participation of marginalized groups and onboarding gender experts as consultants for the initial stages of project planning.

It is important to acknowledge women as planners and decision-makers of infrastructure and climate adaptation projects — not merely beneficiaries of them. UN-Habitat reports that in Asia Pacific, women are under-represented at all levels of governance, including in ministries relevant to urban development, and at the local level as well. This kind of situation present in governments throughout the region must be transcended in order to give women an equal voice and active participation on urban planning projects, which directly affect their lives.

Maribel Hernandez elaborates on this by saying, “Having women involved in the process doesn’t mean only having women in the room, but also providing them with the most favorable conditions for them to express themselves. Sometimes, establishing women groups, for instance, could be a solution in circumstances where cultural contexts or rules prevent them from fully participating in mixed assemblies. Setting meeting times that are easy for women to attend is also a way to maximise their involvement into these processes.” She adds that it is essential for women to be present in all decision-making instances and processes “across the board”, and for cities to make sincere efforts to elicit their full participation in the planning process.

Including women’s views can effectively influence the design of infrastructure projects (including accessibility features and installations such as gender-segregated spaces on public transport) in a way that benefits all the members of a community.

Unequal power structures, and prevalent social norms need also to be factored while developing infrastructure projects to avoid the propagation of existing negative views on women. According to Uma Pal, Lead Associate at the CRH, an in-depth understanding of the socio-political context is vital for the planning and design of inclusive infrastructure investments. “When building gender-inclusive infrastructure, it is worth taking into consideration intersectionality in specific societies,” she says. “In India, for instance, caste and sanitation work are intrinsically linked and women sanitation workers’ working conditions are often disadvantaged under the double burden of patriarchy and caste. Hence, we need to make sure that new infrastructure systems do not simply focus on hard infrastructure solutions, but also bring about shifts in behavioral aspects and social norms to ensure the effective inclusion of all.”

Gender-responsive budgeting (GRB) refers to the effective collection and allocation of public resources to advance gender equality and women’s empowerment, rather than merely creating separate budgets for women or solely increasing spending on women’s programmes. A UN Women report notes that even Asia Pacific countries that purportedly spend “significant” resources on gender equality only allocate a mere 0.5 percent to 21.9 percent of their national budgets to such efforts; further, the report indicates that many of these countries’ financing gaps for implementing national action plans on gender equality are as high as 90 percent.

Anu says GRB is a crucial consideration when designing gender-inclusive and resilient infrastructure. She recommends that cities also allocate budgets to ensure the participation of different vulnerable groups and women in project planning. This will help ensure that the benefits of these infrastructure projects reach women and other vulnerable communities.

Development organizations have published resources to help cities adopt GRB: UNESCAP has offered a free guide for cities to mainstream GRB good concepts and practices into their urban planning and development operations.

Gender mainstreaming is a key area of focus in CDIA’s project preparation work.

From 2018 to June 2021 alone, infrastructure projects that CDIA helped prepare are expected to directly benefit 8.17 million city residents across Asia Pacific –  and women, who make up 43% of that figure, are one of the key beneficiary groups of these projects. CDIA also endeavors to ensure women’s participation in its various stakeholder consultation activities so they can be actively involved in shaping the infrastructure projects in their city.

In 2012, CDIA worked with the local government in Pimpri, India to help the city design a 24/7 clean water supply project. This project, which aimed to cover 100% of the city’s population with clean water by 2018, not only provided women and children with clean water but reduced the incidence of  water-borne diseases.

CDIA has worked with cities across Asia and the Pacific to expand women’s access to sustainable transport systems. CDIA worked with the city of Islamabad, Pakistan to plan the Rawalpindi-Islamabad Metrobus Network to carry up to 125,000 passengers per day. Metrobus trip fare costs just $0.20, and the buses have separate compartments for male and female passengers, allowing women to commute in safety.

The city of Handan prioritized water conservation and water recycling in its 2008-2020 Development Master Plan; and in 2011, asked CDIA to help complete a project preparation study for a local wastewater management and recycling project, which aimed to treat 100% of the  wastewater generated in the city. This project is expected to improve the city’s environment and livability for some 800,000 residents, about half of whom are women.

Inclusive and resilient infrastructure reaps invaluable climate and development benefits for cities and makes a profound impact for gender inclusion. If they adopt gender-specific and resilient approaches when planning and investing in urban infrastructure, policy makers and urban planners can make meaningful progress toward making their cities more livable for everyone.

CDIA is an ADB-managed trust fund with 14 years’ experience working with cities in Asia and the Pacific. It has helped cities prioritize and prepare climate-resilient infrastructure projects with strong social inclusion commitment that have been linked to financing. Cities can apply for CDIA’s project preparation support or register for CDIA Virtual Clinics, where they can receive intensive, one-on-one consultation on preparing bankable infrastructure projects.