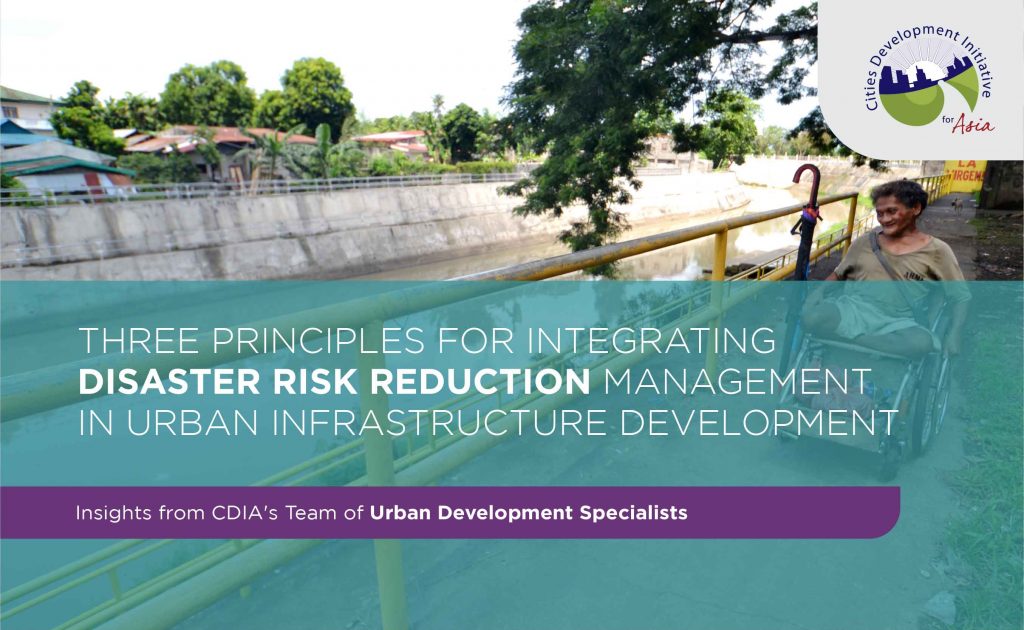 Disasters such as floods, cyclones and drought have affected more than 4.2 billion people over the last two decades.

Asia Pacific is home to more than 40% of these natural calamities, which presents city leaders in the region with insurmountable challenges – not only in terms of disaster recovery, but also in preventing and mitigating disaster risk and building urban resilience in the long run.

This is why organizations like CDIA work with cities to help them increase their safety and resilience by integrating Disaster Risk Reduction and Management (DRRM) objectives into infrastructure development. The application of DRRM approaches contribute to resilience, which is the capacity of social, economic and environmental systems to cope with and accommodate climate change shocks and stresses.

Over the course of their collective experience, the CDIA team has identified three key principles that cities most vulnerable to disasters can adapt.

Cities that have employed DRRM practices in infrastructure project preparation have taken a huge step toward increasing their resilience. However, one project on its own will not transform a city from being vulnerable to being fully disaster prepared.

Therefore, an understanding of DRRM must be woven into a city’s overall development plan and integrated with adaptation planning and measures. DRRM actions are those which are aimed at reducing existing and residual risks from disasters of all kinds – including climate and natural disasters and manmade calamities. Further, DRRM aims to prevent risks from future disasters.

Cities that fully consider DRRM will therefore bolster their ability to dynamically adapt to future climate challenges. To support this, CDIA has adopted a system-based resilience framework with four key aspects that underscore the importance of integrated and holistic planning, multilevel governance strengthening, social networks, and financial management.

“Where CDIA is really engaged with and works to add value is in the assessment and prevention phases of DRR,” says Fabienne, explaining the importance of taking a pre-emptive – not merely a reactive – approach to disasters.

CDIA Urban Development Specialist Chee Anne Roño adds another dimension to this, saying that CDIA works to intentionally involve all urban planners – instead of only including technical engineers or local specialists – in every step of DRRM and climate change adaptation projects, from early assessments to implementation and beyond.

This helps planners obtain the necessary understanding of the disaster risks facing their cities and how to integrate with adaptation measures.

Chee further shares how doing so helps urban planners discover “how DRRM measures can then be incorporated into the development of any policy strategies, plans or projects,” and to select infrastructure interventions that “don’t increase the vulnerability of the community.”

Fabienne adds that on top of the essential preventive and risk reduction measures, there is also an important DRRM work to be done in the recovery phase; this includes efforts to establish the necessary practices and structures for a city to become more resilient as well as taking preventive measures for risk reduction.

For example, in 2009 – five years after the 2004 Indian Ocean earthquake devastated coastlines throughout Southeast Asia – CDIA supported the Indonesian city of Banda Aceh to develop infrastructure investments that aim to renew the unique character of the city in the aftermath of the tsunami and boost their tourism and economic activities moving forward.

“If we help rebuild infrastructure after a disaster,” says Fabienne, “then it means we can make sure we consider the lessons learned from that disaster in the planning and recommendation phases for the next projects, and build resilience as a system.”

When CDIA specialists work with cities that face climate risks, they perform a climate risk and vulnerability assessment to evaluate vulnerabilities and the potential impacts of climate-related disasters on projects under consideration.

This assessment is a crucial due diligence activity that takes into account a range of components including climate trends and previous climate events. More importantly, it assesses the existing vulnerabilities, how climate change could make them worse, and the new vulnerabilities, if any – particularly the knock-on effects. This is no small task, as there can be numerous types of disasters linked to climate change that could affect a given city, such as flooding, typhoons, droughts and heat waves, and other natural disasters such as earthquakes.

However, as financial resources for developing cities are often limited, this due diligence helps cities zero in on the most resilient infrastructure investments for them, and how to respond to the needs of the most vulnerable segment of the society.

After all, “you cannot design for everything,” says former CDIA Program Manager Neil Chadder. “It’s all about choosing which infrastructure investments are most important” for each city.

“For example,” he continues, “if you’re working in Bangladesh, you’ll be most concerned with infrastructure to deal with sea level rise and increasing intensity of rainfall and cyclones in the sea of Bengal.”

Project stakeholders therefore need to have a comprehensive understanding of climate hazards and vulnerabilities within their respective areas as a way of prioritizing interventions. CDIA can then support the development of a climate resilience roadmap identifying the critical interventions and infrastructure improvements, including the vulnerable places to avoid. The focus should be on reducing vulnerabilities and identifying robust solutions for the next step of project conceptualization and design. At the project engineering design stage, it is important to stress-test the design specifications so that they are robust to climate uncertainty.

Obtaining data requires a coordinated effort between multiple project stakeholders and agencies. CDIA Capacity Development Specialist Kathleen Jovellanos highlights this by referencing CDIA’s ongoing Tri-City Ferry Project in the Philippines which aims to study the prospect of an alternative public transport in the cities of San Fernando, Dagupan and Alaminos as a way to rejuvenate coastal communities and increase their resilience.

CDIA’s role in this is to coordinate across agencies to ensure data and insights are being shared in a way that adds productively to these early project assessments.

Urban Development Specialist Fabienne Perucca elaborates on this. “We have to speak with other stakeholders, such as the neighboring cities and at the national level also,” she says. “We cannot just focus on one single stakeholder, neighborhood, or even sector. As disasters and climate impacts are typically felt over a wide geographical area, they require coordinated efforts from multiple fronts, irrespective of borders.”

Disaster risks need to be more than just a consideration during infrastructure project preparation. They need to be a catalyst for development efforts within the administrations and communities of secondary cities.

These development efforts are called non-structural measures, which the United Nations Office for Disaster Risk Reduction refers to as the policies, laws, organizational setup and all forms of public awareness training and education that lead to the reduction or avoidance of possible impacts from disasters.

Capacity development is crucial to addressing extreme weather events in cities, but it can also empower city administrations to address other development issues and in the process, rise to the challenge of global accords like the Sendai Framework for Disaster Risk Reduction.

“Some city officials may see some difficulties there, because they may think, ‘how can these global frameworks apply to my own reality?” says Fabienne. “This is precisely the job of project preparation, for ‘everything to make sense.’ We do project preparation to translate those frameworks and guidelines into local actions and recommendations.”

Part of the capacity development plan CDIA prepared during this project involved helping local officials learn to identify communities vulnerable to flooding and find appropriate DRRM solutions for them.

As a result, Brian shared how the government was able to take decisive action on its own and empower its community members to take swift action when needed.

“The communities most vulnerable to flooding near the creeks and the rivers were resettled into more appropriate housing, and areas that are more prone to river outflow have been [structurally] strengthened,” he continues.

“The city was able to do this because it had strengthened its central disaster preparedness and response and was able to activate coordinated actions up to the local level.”

Disasters have more than merely physical impact on cities – they also have profound socioeconomic and environmental effects that can last for years, if not generations.

Through its current projects with cities in Vietnam and Bangladesh – and in a series of virtual clinics for bespoke remote project consultation – CDIA is working with cities to bring about vital climate adaptation outcomes.

A rapidly-changing climate means disaster risk management for cities is very complex work. “But we have to do this,” says Neil. “It is not an option not to.”

CDIA is an ADB-managed trust fund with 14 years’ experience working with cities in Asia and the Pacific and has helped cities prioritize and prepare climate-resilient infrastructure projects with strong social inclusion commitments that have been linked to financing. Cities can apply for CDIA’s project preparation support or register for CDIA Virtual Clinics, where they can receive intensive, one-on-one consultation on preparing bankable infrastructure projects.