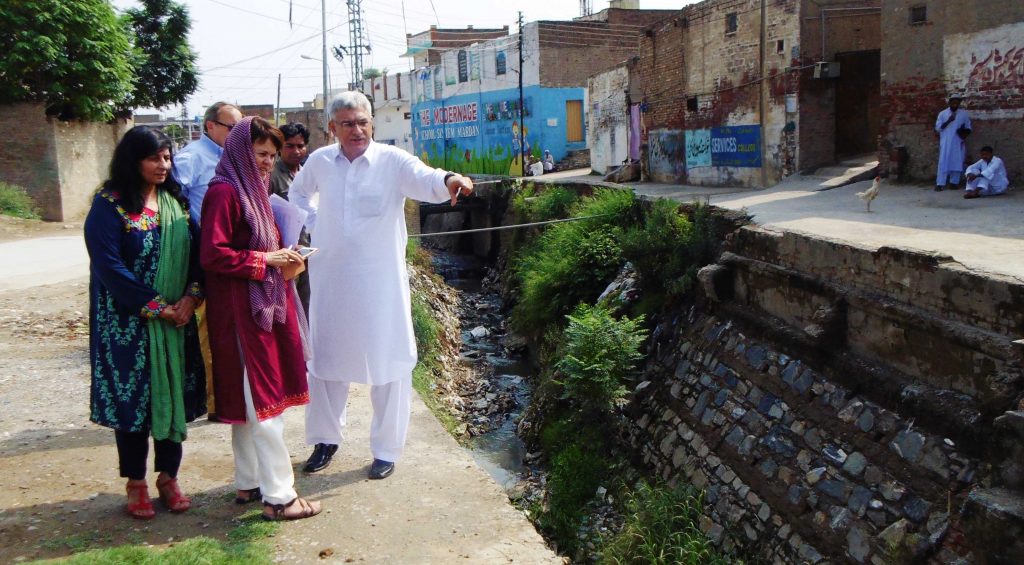 The Khyber Pakhtunkhwa Cities Improvement Project (KPCIP) will benefit at least 3.5 million people in the cities of Abbottabad, Mardan, Peshawar, Kohat and Mingora with improved water supply, sewerage, integrated solid waste management and other critical urban infrastructure. It will also build local capacities to deliver the services in an efficient and sustainable manner. CDIA-funded project preparation study was used as basis for developing this flagship project.

“We are delighted to have contributed to shaping Pakistan’s urban development,” says Lara Arjan, ADB Urban Development Specialist and Project Officer of CDIA. “With the loan approval, the investment plans that the CDIA team has proposed will soon materialize into infrastructure that will increase resilience, inclusion and economic opportunities in the cities.”

The urban population in KPK is increasing rapidly at 3.4% annually and this has led to uncoordinated and unregulated growth. Inadequate infrastructure and limited capacity to manage water, sanitation and solid waste management services are creating major health risks for the population and threatening the resilience of cities to climate change.

As women are mostly in charge of domestic chores, inadequate water and sanitation services further increases the time they have to spend performing these duties and restricts their ability to do “paid market work”.

Cities in KPK are also highly vulnerable to disasters. Since 2010, KPK has experienced at least four major floods due to extreme weather events, which led to health hazards, economic losses and damage to infrastructure.

How the project will benefit urban residents

KPCIP will facilitate the enhancement of climate-resilient and gender-friendly urban infrastructure in the five cities. The investment will augment over 1,200 km of water supply and 156 km of sewerage network and household connection; construct treatment facilities; and connect 150,000 new households to the water supply system with smart water meters installed to improve service efficiency and conserve water.

It will also develop state-of-the-art integrated solid waste management facilities including materials recovery and waste-to-energy options; and develop green open spaces that will have women-friendly facilities, and designed to contribute to climate change adaptation.

KPCIP will further include activities to strengthen the capacities of institutions and providers of urban services, and encourage behavior change and ownership of the project. All of these will ensure the sustainability of the investments and their long-term benefits.

Finally, it will support enhanced access of women to economic opportunities and increase their participation in urban governance through various skills development activities.

In 2017, CDIA worked closely with the cities of Abbottabad, Mardan and Peshawar to develop their 10- to 15-year investment plans. Out of the climate vulnerability assessments conducted by the Urban Climate Change Resilience Trust Fund (UCCRTF) and the long list of investments identified from various consultations and city visioning activities, CDIA was able to recommend priority investments, which were then developed to pre-feasibility level.

CDIA likewise recommended institutional strengthening and capacity development measures toward the efficient management and sustainability of the infrastructure.

ADB and the Government of Pakistan (GOP) took the CDIA recommendations and included the cities of Kohat and Mingora in KPCIP. In 2019, ADB and UCCRTF financed ADB’s first project readiness financing (PRF) to cover the following: 1) detailed engineering designs, 2) government reform plans, 3) advance procurement, and 4) establishment and staffing of project management unit and city implementation units.

The PRF has facilitated the completion of all project readiness requirements, enabling the KPCIP to proceed to immediate implementation following the recent ADB approval of the $650 million project, which is co-financed by the Asian Infrastructure Investment Bank (AIIB) with a $200 million loan.

“The CDIA study became the backbone of our ensuing project,” says Kiyoshi Nakamitsu, ADB Principal Urban Development Specialist and Project Officer of KPCIP. “It all started with CDIA giving us preliminary feasibility assessments in both the civil work infrastructure investments and institutional arrangements.”

Dear Friends, To wrap up 2021, we would like to thank you for your continued support and collaboration with us over ...