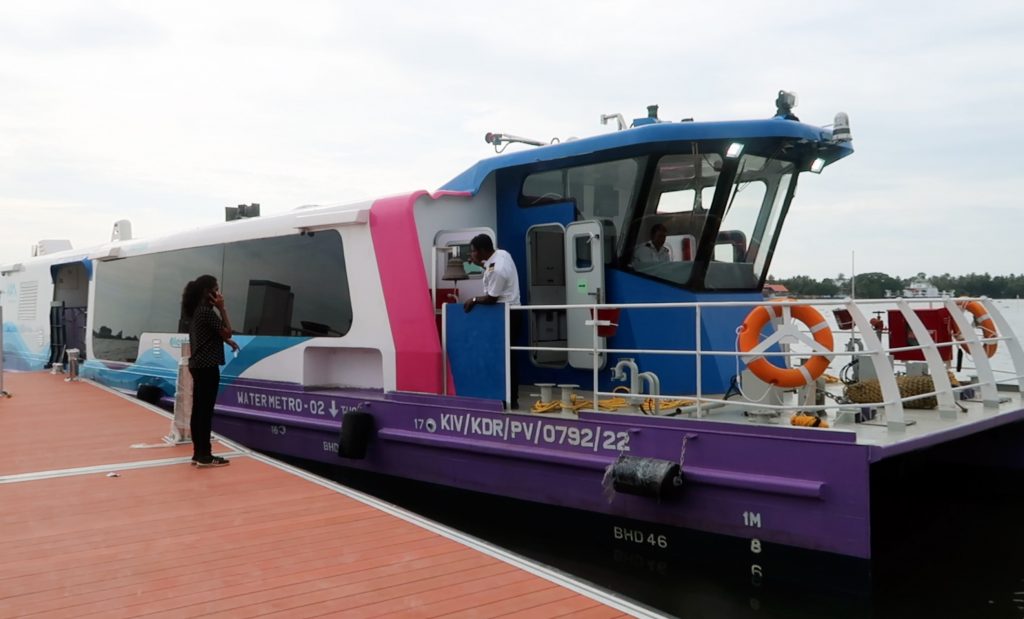 In Kochi City, India, the government is preparing to launch the Kochi Water Metro, a state-of-the-art and environment-friendly water transport system that will revolutionize urban commuting and offer a prototype of what a sustainable water transport should be.

Spread over 10 islands and crisscrossed by backwaters and the Arabian sea, Kochi is one of the fastest-growing cities in India. From an ancient port city, it is now a well-developed trading center and a hub for information technology, sea-based industries, and tourism in the country.

Water transport has played a pivotal role in the growth and development of Kochi and the State of Kerala in general. At the beginning of 20th century, 90% of residents in Kerala were using small boats to reach the mainland, where they can sell their products. Over time, however, they started shifting to road-based transport as new roads and bridges were built. Now, less than 3% of residents are using inland water transport.

In Kochi, this modal shift has contributed to traffic congestion and pollution, as exacerbated by unplanned urban sprawl; limited road network; and private vehicle ownership, which is almost doubling per year.

To address this challenge, the State of Kerala, through the Kochi Metro Rail Limited (KMRL) is getting ready to make the Kochi Water Metro commercially available to the public starting November 2022.

First of its kind in India and South Asia, this massive urban water transport system will connect Kochi’s island communities with the mainland through a fleet of 78 battery-operated electric hybrid boats plying along 38 modern terminals and 15 routes spanning 76 kilometers. Of the 78 boats, 23 will have a capacity of 100 passengers, while the rest will have a capacity of 50 passengers.

The boats are using Lithium Titanate Oxide (LTO) batteries, which can be charged in just 15 minutes using their specially-designed charging system. LTO batteries are not only the safest battery available commercially in the world but they are also long-lasting with a life span of between 7-10 years.

“The Kochi Water Metro is a game-changer,” said Shaji P.J., Chief General Manager at KMRL. “It has a lot of green initiatives attached to it, it is a disable-friendly system, and it is connecting with other transport modes. We are one step ahead in the shipping industry, such that we are already incorporating a variety of innovations into the system,” he added.

Once Phase 1 is fully operational in 2024, it is expected to serve 34,000 passengers a day, thereby offering a fast, reliable, and state-of-the-art passenger transport option – a far cry from the poor conditions of ferries and jetties that Kochi residents are familiar with.

“The water metro was a beautiful experience; it was very scenic and fun-filled! I never knew there were so many beautiful places around Kochi,” said Kripa George, one of the passengers during a pilot run conducted by KMRL.

“I have neighbors working in Kakkanad and though the distance is not that huge, travel takes at least 1-2 hours. The water metro would definitely help them and I’m just waiting to tell them that within 15 minutes they can reach Kakkanad.”

The Kochi Water Metro is a pioneering initiative in sustainable urban water transport. First, it is environment-friendly with climate co-benefits. The use of electric propulsion for the boats is expected to reduce greenhouse gas emissions by at least 16,500 tonnes per year upon full implementation. This project supports India’s target of becoming carbon neutral by 2070.

The boats were made of lightweight and recyclable materials; engineered to reduce noise and wave effects that can cause erosion in banks and affect the fauna and flora living in the waterways. Toilets were also not made available inside the vessels, to ensure that no discharges can harm the backwaters and Vembanad Lake, one the largest lakes in India.

“Even though I have been living in this state for 25 years, backwaters got a charm of its own and I see that as very pleasant, away from the traffic,” said Nisha Nair, another passenger who joined the pilot run.

“The ride was almost silent and I really don’t get bored seeing the water and the green, so a ride like this to my work every day looks very pleasant. Even the tourists can use it because it’s something really beautiful,” she added.

The system also adheres to universal design with inclusive and gender-responsive features. For example, its terminals use floating pontoons so that persons with disabilities can safely and conveniently get in and out of the boats irrespective of tidal variations.

“Water Metro is friendly to differently-abled persons because of the ramps and easy access from the road to the station to inside of the boat,” said Kripa. “I am an architect and so I notice all areas, which are easily accessible to them.”

In terms of safety, all passengers, especially vulnerable populations will benefit from the boats having a navigation system that applies the best and the latest technologies and is compliant with the highest safety standards; terminals that are in more accessible areas with adequate lighting, covered walkways, and proper roads; and CCTV cameras and other surveillance and integrated communication systems that can ensure proper safety monitoring.

Another landmark feature of the Kochi Water Metro is its automatic passenger control system that can restrict the number of passengers inside the boat based on its capacity. This system prevents overcrowding, considered as the primary cause of accidents in water transport.

The Kochi Water Metro has taken into primary consideration its integration with other modes of transport, thereby setting up its terminals in areas where bus stands/stations, metro (rail) stations, feeder networks, and other public transport modes are available.

“Through this integration, we are offering a seamless transport for the people,” said Sajan John, Chief Operating Officer of the Kochi Water Metro. “We are providing comfort to passengers so that they will leave their vehicles and come back to public transport. This is what Kochi Water Metro is looking into for the sustainable development of our city.”

The Water Metro will have its maiden route, High Court (in the mainland) to Vypin Island commercially available next month, which is expected to benefit at least 6,000 passengers a day.

Origins of the Kochi Water Metro

The project originated in 2010, when Cities Development Initiative for Asia (CDIA) supported the Kochi Municipal Corporation with a pre-feasibility study (PFS) on the ferry services investment proposal to alleviate road congestion and address the transport needs of island communities within Kochi’s extensive network of waterways.

Building on the CDIA recommendations, the Government of Kerala, through KMRL prepared a detailed project report in 2015, which then became the basis for negotiating with the German development bank, KfW a long-term loan amounting to €85 million to implement the Kochi Water Metro Project.

“It is something very nice to see, when from a pre-feasibility study, the project gets materialized,” said Shaji. “Though there were variations that came up during the process of implementation, that first step of the initiative was done by CDIA of ADB. And so, we are thankful to them for such an initiative and because of which, this project is now in place,” he added. 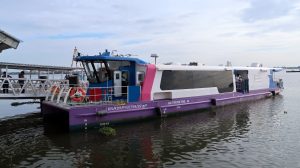 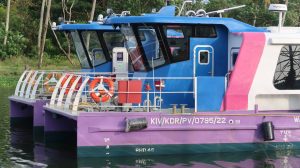 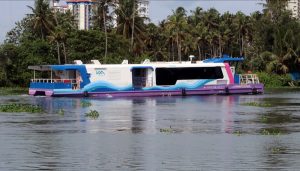 2. Terminals that are almost complete 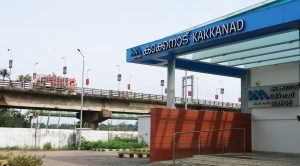 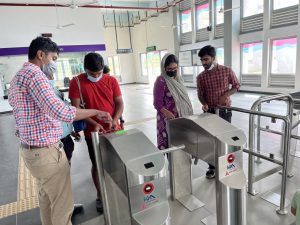 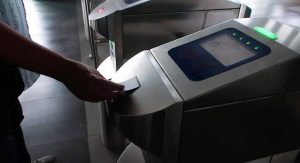 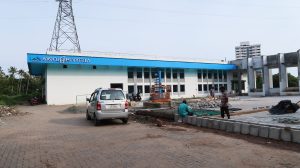 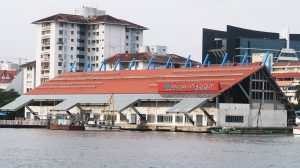 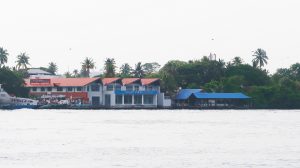 3. Passengers comfortably seated in a fully air-conditioned ferry during the pilot run 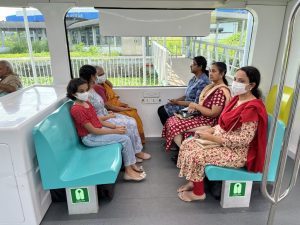 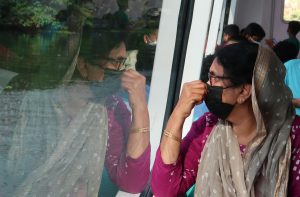 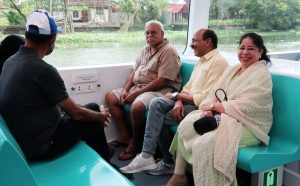 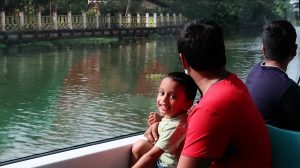 4. Kochi Water Metro ensuring seamless transport with its integration with other modes 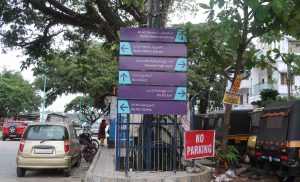 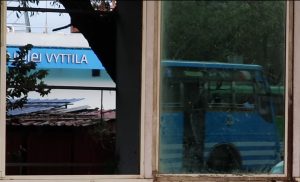 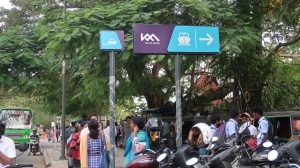 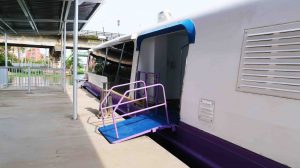 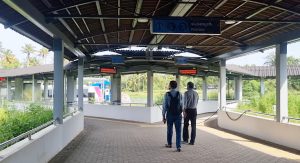 Bhutan’s expanding urban population brings with it considerable housing challenges that affect the safety and living conditions of residents. On 22 ...